In 1914, Gustav Bach, Albert Hirth, and Gustav Klein founded a factory called KACO in Heilbronn – a city in Baden-Württemberg, Germany. Its original purpose was the manufacturing of engine gaskets, but it slowly grew over the years to include more products such as shaft seals, radio accessories, and choppers – the predecessors of today’s inverters. In 1994, the company turned towards the production of photovoltaics, and now focuses entirely on inverters and monitoring equipment for PV systems.

Since then, KACO has generated a strong reputation in creating quality, high reliability inverters, which offer a combination of the utmost efficiency with ultimate uptime for decentralized commercial and utility-scale solar power plants. Their latest product, the Ultraverter, adds a micro-inverter to the lineup.

KACO’s headquarters is now located in the city of Neckarsulm in Germany, and also has factories located in Canada, USA, Greece, and South Korea, to name a few.

We stock KACO inverters, and can help you design a system around them. 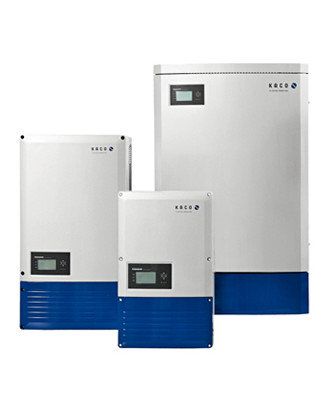 In compliance with Ontario's business shutdown we ONLY do online-commerce / mail-order sales. Please place your order online, or via phone or E-mail, and we will send you a quote/invoice with online payment options. For the time being we no longer do in-house consultations, though you can still talk to us via phone etc. Thank you for your understanding!